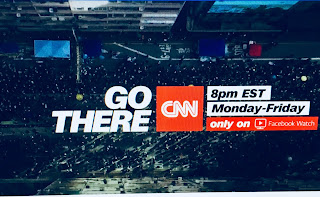 CNN premiered “Go There” this week on Facebook Watch, a new FB-funded news show, to see if a different style of output – akin to Instagram Stories – will work on the platform.

It’s the latest example of a TV network adapting their news programming to resemble content on social media in the hope of competing for eyeballs.

CNN say the programme is more conversational, less scripted, and relies more on reporters recording themselves directly to mobile phone in vlog style, while still featuring some traditional news footage.

It’s aimed at the next generation of news junkies, concentrating on single topics like climate change and race and identity, in 10-15 minute square-formatted episodes.

CNN will distribute the show on its main Facebook page and cross-post episodes to CNN International’s Facebook page. To help drive viewership, the network will also promote the show on some of its sites and will likely take advantage of Instagram Stories’ link feature so that people can swipe up from that platform to tune into episodes on Facebook.

In the second quarter of 2019, Ball's figures fell from 9.05m to 8.27m - but her breakfast show is still the most popular, industry body Rajar said.

The decrease in listeners means Ken Bruce's mid-morning show on Radio 2 becomes the most popular radio programme in the UK, with 8.49m listeners.

Up for the fight: Linear broadcasting vs streaming services

Traditional TV broadcasters have seen their business hugely disrupted by digital players recently from Netflix and Amazon through to Instagram and You Tube.

Last year the BBC admitted that young people spent more time watching Netflix than all of its BBC TV services each week.

But what is the future for linear broadcasters and can they adapt their output? Well, the answer is yes – particularly as linear broadcasting still (but only just!) remains the most popular way for UK adult consumers to view content, with 88% of us tuning in every week for an average of 3 hours and 12 minutes each day, according to Ofcom.

But to tackle the streaming fight head on, many traditional broadcasters across Europe have launched or are about to start Streaming Video On Demand (SVOD) with Britbox in the UK (BBC and ITV), Joyn (ProSiebenSat1.Media and Discovery) in Germany and Salto (TF1, France Televisions, M6) in France.

More here from the IBC.

To discuss broadcast PR opportunities for your brand story in the fast-changing international broadcast environment, please call Mark Jones on +44 7967 353 727