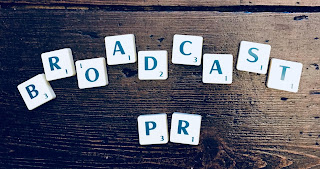 Although many PR and integrated agencies list broadcast in their services, it is often an afterthought and lacks the strategic thinking experienced broadcast PR professionals provide - especially if clients are after top tier broadcast coverage.

B – B-roll content – free, broadcast quality video content edited loosely and offered to broadcasters to re-edit themselves to help generate coverage of an event or story

G – GVs – General Views – a variety of shots to set the scene or location, often an exterior view of a client’s building, for example

I – Interviews – an experienced broadcast PR producer will coach a client spokesperson to provide engaging, succinct, relatable and branded answers for broadcaster use

J – Jump-Cut – a sudden, noticeable edit or cut from one shot in a sequence to another without an intervening shot such as a cutaway. May make the sequence unusable for broadcasters

N – News – when pitching to broadcast media, there must be an element of news to the story or at the very least a new development in a current story

O – Outside Broadcast - in broadcast PR terms when a TV station broadcasts live from a client’s event or announcement. We facilitate this by offering satellite trucks and camera crews for broadcaster use

P – Production – the process of ensuring a client’s story, visuals, branding and messaging are captured, edited and distributed to the broadcast media

T – Treatment – scoping and scripting a brand film for example, outlining the target audience, narrative, look and feel, messaging and delivery. The treatment must be signed off by the client before shooting starts

W – Wide shot – typically shows an entire object or human figure and is usually intended to place it in relation to its surroundings, e.g. a branded factory exterior or a person using a product

X, Y, Z – nothing relevant but don’t want to sell you short so here are some others that didn’t make the cut...!


A-roll – a short, edited video in the style of a news report which tells the client’s story and, in effect, summarises the longer, supporting B-roll

Cutaways – vital components of a B-roll edit which helps a broadcaster cut a sequence and gets that content used! Usually close up shots of faces, eyes, hands, products, etc

Headline – can you summarise and simplify your client’s story pitch into a headline? This will help time-poor broadcast journalists

We are experts in broadcast PR with over 20 years experience. #makeyourmarkinthemedia and get in touch for strategy, media relations, video production and distribution, media training and everything broadcast PR-related! +44 7967 353 727